Photographers considering using a computer based on Linux not seldom have exactly one reason to do so: Darktable. Darktable is an open source project, best compared to Adobe Lightroom. It is a photo editor following the workflow of photographers, thus having them easily feel familiar with the app. Beginners will be overwhelmed by its feature richness. Now there is another option, if you don’t want to use a Linux-system. A few days ago, Darktable has been made available for Mac OS X

It almost sounds too good to be true. But the project Darktable doesn’t need to hide behind the functionality of its commercial competitor Lightroom. Some even say, that Darktable’s RAW Tools are even better than those Adobe has to offer. Adobe recently changed the name of its product to Photoshop Lightroom and dropped the price for the most recent version 4 to an affordable 149 USD. As the competitors show similarities in the look of the whole user interface, I wonder who got inspired by whom… 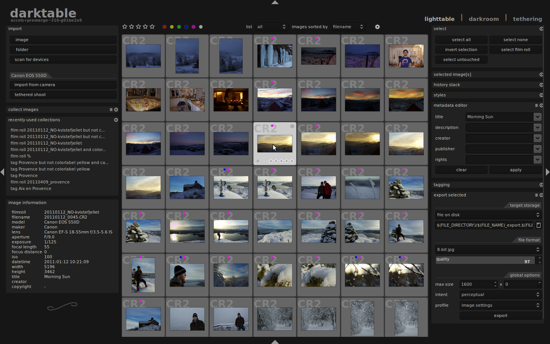 Darktable, available in several languages, that are automatically invoked, according to the operating system it detects, follows a modularized workflow. Lighttable lets you do administrative tasks in the likes of Bridge or Picasa or … Lightroom. Meta-data can be viewed and changed. Categorization can be done from here, as well as sorting operations in a variety of ways.

The module darkroom is responsible for the manipulative work. As darktable is limited to tasks that real photographers would do in real darkrooms, we don’t have the opportunity to work on collages or other montages. All effects, corrections and related functionality can only be invoked on photographs. Darktable’s methods are powerful and very finely tunable. The results are often described to be better than what can be achieved using so-called professional software such as Lightroom. The last module, called tethering, is used to connect cameras to Darktable in a way that their contents can be imported automatically. 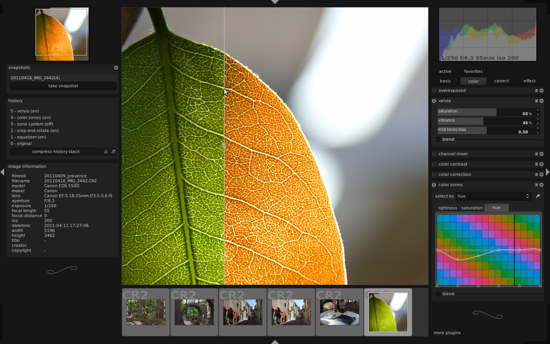 Darktable’s darkroom with an image opened

The product is comfortable and fast, the results are high-class. Moreover, Darktable is completely free. If you’re into one of the many Linux-derivatives, you probably know that the software has been available for quite a long time to the users of the open source OS. Ubuntu-users will even find a version of Darktable pre-installed. Be aware that these usually are older versions, so make sure you update soon as possible, using one of the many repositories available. If your OS carries names such as Fedora, Suse or Gentoo, the same applies to you. Fit as a fiddle programmers of course just compile their own version using the Sourcefourge– or Github-sources, just like Chuck Norris would do. Wait, probably with Chuck Norris sources compile themselves to avoid having Norris compile them. Anyway…

Freshest member of the family is the Darktable-version for Mac OS X, which is available as a DMG using this link. If you read the blog entry that announces the availability of the Mac-version, you’ll feel flooded with comments of users stating to have a wide variety of problems using, configuring, but also even installing the app.

Gotten insecure from the comments I mentioned before, I decided to give Darktable a spin, so none of our readers would run into trouble and probably blame me for having gotten their MacBooks damaged. I installed Darktable as is usually done using the downloaded DMG. Darktable went from a lean 15,5 MB DMG to a not so much fatter 52 MB app. And I did not experience any problem whatsoever. I imported over 1.000 pictures into lighttable and I was able to fire effects and filters at chosen pictures without any misbehaviour on the side of Darktable. Everything worked absolutely flawlessly, until I tried to connect my camera via the tethering-module. I couldn’t get that to work, but a workaround for this problem is already in existence. As I never use automatic importing of pictures, I didn’t give this workaround a spin, though.

The recent version of Darktable carries the number 1.05. The whole project is organized professionally und comes with a documentation, that leaves no stone unturned. You should definitely check out the project’s ressources-section.

People seeking a solution to professionally manipulate their photos, need not push out cash any longer. As cash always tends to vanish as soon as you look at it, Darktable might save you from premature bankruptcy and help you lead a happier life. You should have a 64-bit OS, though. It still runs on 32, but you know…