While we were just discussing an accusation against the TSA for racial profiling (GASP!), did you know that they were also the official state-sponsored fashion and humor police? I mean, who couldn’t see these guys adjudicating your local fashion show? 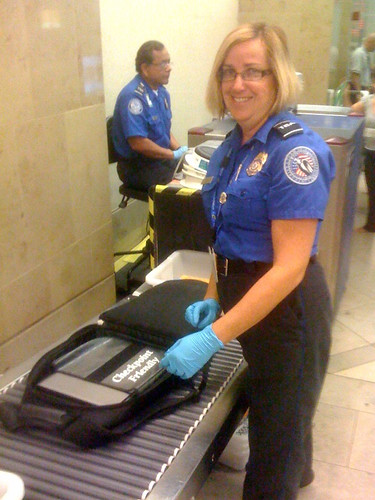 Reader pixelpusher220 writes in about the tale of how one man’s shirt got him booted off of a Delta airplane after passing through TSA security, as recounted by Cory Doctrow.

Back in 2007, I designed a shirt for Woot! that featured a screaming eagle clutching an unlaced shoe and a crushed water bottle, surrounded by the motto MOISTURE BOMBS ZOMG TERRORISTS ZOMG GONNA KILL US ALL ZOMG ZOMG ALERT LEVEL BLOODRED RUN RUN TAKE OFF YOUR SHOES. Among the lucky owners of this garment is Arijit “Poop Strong” Guha, who proudly wore it this week as he headed for a Delta flight from Buffalo-Niagara International Airport to his home in Phoenix.

But it was not to be. First, the TSA Delta agents questioned him closely about the shirt, and made him agree to change it, submit to a secondary screening and board last. He complied with these rules, but then he was pulled aside by multiple Niagara Frontier Transportation Authority cops, more TSA, and a Delta official and searched again. 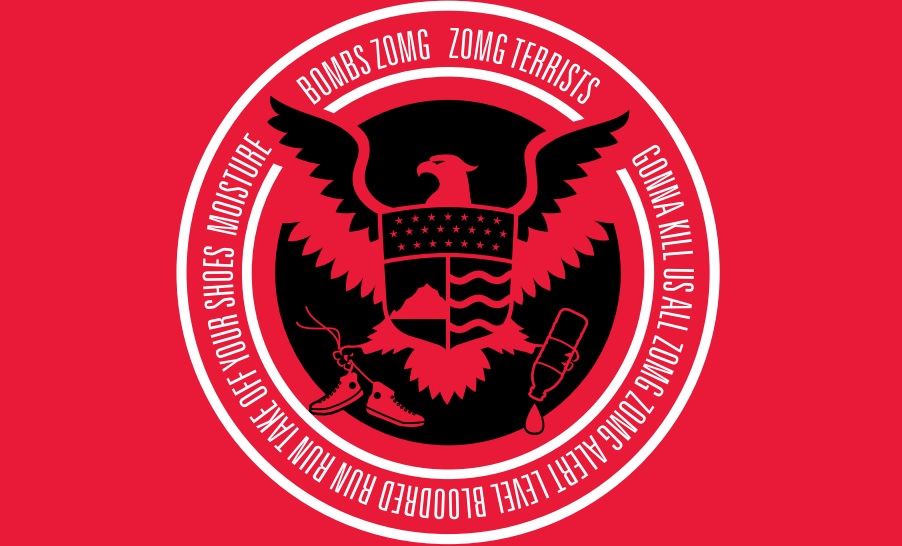 
It’s worth noting that these shirts were designed by Cory Doctrow and sold as part of a charitable program.

Now, I’ll restate it again, Arijit had already gone through the TSA screening when he and his wife were then approached by Delta employees at the gate who informed him that he had committed the crime of making other passengers “uncomfortable”. When Arijit informed the Delta employees that he was wearing the shirt specifically to mock the security theater we call an airport these days, he was put through another round of screening at the gate by several TSA and local agents and then told that he would be allowed to board. The Delta pilot, catching wind of this, requested Arijit not be allowed to board, because laughter would not be tolerated on his enormous hunk of flying metal. Oh, and they also refused to allow his wife to board the plane too. No reason was apparently given for this, but I’m guessing there may have been some plaid mixing with pin-stripes in her outfit, and the pilot found it to be lacking in fabulousness.

Or maybe there was another reason. According to Arijit, the officer wanted to interrogate him further, saying that Arijit had given a “stupid answer” and “looked foreign”:

“Certainly he wasn’t implying that dark-skinned people are not real Americans and that white people are the only true Americans,” Arijit writes in part of his snark-filled synopsis. “Fortunately, Mark’s request was denied. Apparently, someone at NFTA recognized this bigoted meathead for the bigoted meathead he was and that nationality is simply a concept that exists solely on paper and cannot be discerned from just looking at someone.”

And yet he still wasn’t allowed on the plane. Was it because of his t-shirt? Was it because the motherfucking eagle on it caused concern amongst passengers? Or, as has been previously accused, was it because too many TSA agents find brown-skinned people suspicious and alarming?