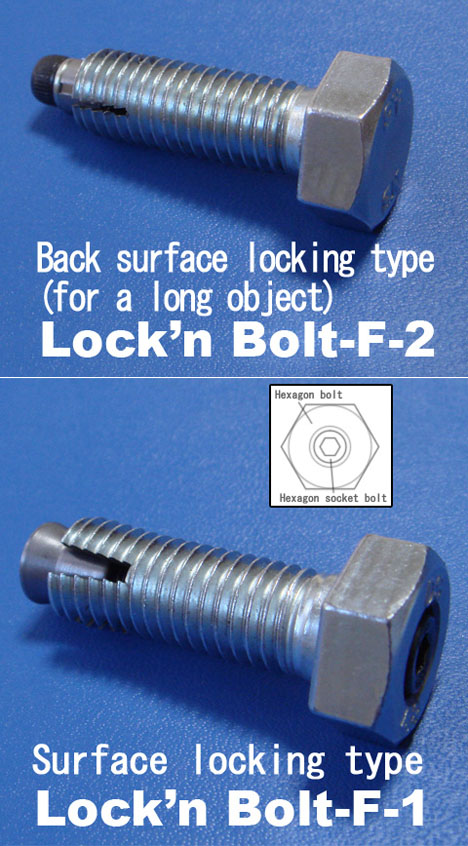 Once or twice a year we see redesigns of hand tools, like Craftsman’s recent announcement of pliers updated with LEDs. Less common are attempted redesigns of fasteners, which we haven’t seen since GRK’s “W-Cut” no-pilot-hole-needed screws from 2008. But now Kenji Hasegawa, who runs Japanese automotive parts supply company Lock’n Bolt Corporation, has developed something surprising: A bolt that needs no nut.

Hasegawa’s Lock’n Bolt-F is designed specifically for industrial and commercial applications where constant vibration can eventually loosen typical nut-and-bolt configurations. The design is pretty ingenious: The bolt has two slits on the inside end, in which a conical metal slug is placed. As you screw the bolt in and the slug makes contact with the bottom of the hole, the bolt’s ends begin to separate, essentially jamming the entire thing in place.

The reason something like this can only succeed in industrial/commercial applications (as opposed to something a DIY’er might try to do) is that, as far as we can tell, the design requires the bolt’s length be precisely calibrated to the depth of the hole in order for the head to meet flush with the surface. As for joining sheet goods, where the nut would ordinarily be exposed under the surface, I wonder if the slug could be tapped with a hammer to lock up the works. Sadly I cannot read Japanese, so if any Nihonjin can provide any insights, please let us know in the comments.